FREE SHIPPING ON ORDERS OVER $75!
15% OFF LAUNCH SPECIAL!  USE COUPON CODE LAUNCH15 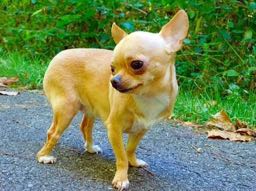 A Chihuahua born with little to no chance of survival

Wheels was born with little to no chance of survival which was confirmed by several vets. When I took her home, she weighed a mere 6oz at 10 weeks. She was infested with worms, fleas, and mites. She had a heart murmur and no skull covering half of her head. I decided that I was going to give her every chance I could. She had major issues with eating and drinking. She refused both. The vet said she had “failure to thrive”. I syringe fed her around the clock but she continued to lose weight. She was so thin and skeletal and was clearly starving to death. The vet had no idea what to do. I found some better food for her and stepped up the number of times I was force feeding her a day and she gained some weight and managed to soldier on. She still wouldn’t eat or drink on her own and it clearly affected her general health and energy level.

This is when I was introduced to Nancy’s supplement. Wheels weighs in at one pound nine ounces full grown! I started adding it to Wheel’s food in small increments. After the first day on the supplement, I noticed Wheels seemed perkier and had much more energy. I was so shocked that something could work so fast! By day two, she was running when we went for walks which I had never seen her do before! I knew then, that something was definitely changing in her tiny little body! Later that day (DAY TWO OF THE SUPPLEMENT), the impossible happened! I literally couldn’t believe my eyes! My sweet little baby went voluntarily to her food bowl and for the FIRST TIME in her two years of life, began to eat voraciously from her food bowl ON HER OWN!!! I was in tears. I couldn’t believe this had happened and it had happened so fast!!! Thank you for giving the love of MY life HER life!!! She is so happy and full of energy now! I cannot wait to see what the future holds. She is more full of life and vigor with each passing day. THANK YOU!!

UPDATE: After a month of being on Nancy’s supplement, she is absolutely soaring! The changes are unbelievable and radical. Her energy has become boundless! The dog that used to hate walks, now requires at least two long walks a day if I want to have any hope of sleep at night! We have a mile long loop behind our house that she could only get about 1/16 around before the supplement. I had to carry her back. She is now making the FULL MILE…twice a day!! Remember that this dog weighs one pound nine ounces! That is a marathon for those tiny little legs. I have seen her chase her tail for the first time in two years and play with toys for the first time in her life! She runs excitedly to the kitchen as I am preparing her food. Her coat is so silky smooth and thick now. Most amazing, is the change in her head/skull malformation. She used to have a huge swollen bump on the left side of her head where no skull covered her brain. That area was always inflamed. After two weeks of taking the supplement, her brain swelling had decreased and has continued to decrease drastically! I have no words for how grateful I am. The love of MY life now has the chance for a long, active, happy, and healthy life. Thank you again! ! It is amazing what PROPER; scientifically balanced nutrition can do! I am thrilled beyond words and cannot wait to see what the future brings now that Wheels is STRONG!

Bella at 13 years was having mobility and navigational joint and hip issues. After a few weeks in the Superfoods Pet Supplement — look at her results.
Read More

A Chihuahua with a nervous disposition

I got great results and found that she became energized and even wanted to play with me for the first time in years!  She gained her spunk back and I started seeing her personality that I had fallen in love with many years ago. That was enough for me to become a believer and I use the product now twice a day.
Read More

Vet was amazed and said just keep doing what I am doing which is your supplement twice a day!
Read More

A Golden Labrador and A Doberman/Shepherd Mix, both post op and aging

I am convinced the Superfoods Supplement plays a big part in their continuing quality senior life.
Read More

After a few weeks on your supplement he had a happier mood about him and definitely more energy.
Read More

A Blue Pitbull who was a Victim of Animal Cruelty

his boy is smiling and happy and we know for sure a lot of that is due to the terrific healing ingredients in Nancy’s Supplement! Thank you so much for supplying Windsor with this wonderful product.
Read More

A Coonhound, branded and starved with three infections

Chance is doing incredible, and I can say 75% of it is because of the supplement. It is so wonderful to have such a simple to use, all in one, tasty solution to such a variety of problems he had.
Read More

a 13-year-old Chihuahua with severe Arthritis and Tumors

I have no doubt that your supplement saved her life. She’s having the life she never had as a pup. I’ll be a customer for life.
Read More

A dog suffering from hot spots

My pet companion “CoCo” has made tremendous progress in just 14 days after beginning your Superfoods Supplement.
Read More

The Superfoods Supplement has played a part because of contributing to her overall health and balanced nutrition, boosting her immune system, and she is just feeling great now.
Read More
1 2 3 … 5 Next »
The testimonials are experiences of years of satisfied customers on their use of the product. They are not claims or promises. Feel free to show your physician or veterinarian the ingredients and explanation of each product on this website and on the bottle. Each natural ingredient can be researched as a consumer.